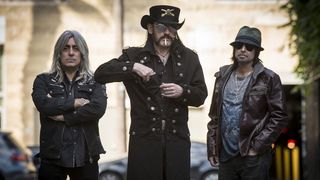 A clip of Motorhead performing their classic track Bomber has been released.

It’s lifted from upcoming live package Clean Your Clock, which will be released on coloured 2LP gatefold with pop-up art, CD, DVD/CD, Blu-ray/CD and digital formats on May 27 via UDR.

The show was recorded and filmed on November 21 and 22 last year during the band’s shows at the Zenith in Munich, Germany – just a month before frontman Ian ‘Lemmy’ Kilmister died of an aggressive form of cancer aged 70.

Clean Your Clock is available for pre-order via the label’s website.

This year’s Metal Hammer Golden Gods event will see Motorhead men Phil Campbell and Mikkey Dee join Saxon onstage to play A Salute To Lemmy. Tickets for the event at London’s Eventim Apollo on June 13 are on sale now, priced £6.66. Fans can place their votes for this year’s awards to be in with a chance to win tickets.