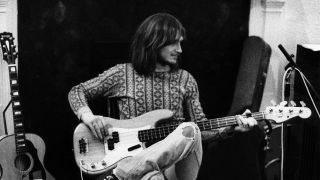 It’s autumn 1972. John Cale is vacating the studio. A picturesque residential studio in the Oxfordshire hills, The Manor is a recent acquisition by one Richard Branson, a hirsute, budding music impresario. The next artist booked in is a wan, taciturn 19-year-old unknown called Mike Oldfield. Noticing a shining set of tubular bells among Cale’s equipment, he asks if he can add it to the two dozen instruments he’ll use to record his one-man symphony, tentatively titled ‘Opus One’. Released the following year, that album, redubbed Tubular Bells, would become a commercial and cultural phenomenon, launching Oldfield as one of the UK’s most acclaimed composers, bankrolling Virgin Records for years to come and setting Branson on course to become the country’s most recognisable captain of industry.

Thirty-six years on and with the rights to the album now his again, Oldfield, the arch-tinkerer, remixed it again. Surely it’s hard for him to remain objective about an album he knows inside out?

“It’s actually easier now. Listening back, the sound quality is actually great, and the most amazing thing about it was that it was all first take. Nobody, myself included, would dream of doing that now. One of my first decisions about this remix was to leave it as played. There’s a spontaneity about it, a dynamic drive that would’ve been lost, so I left in the squeaks and pops and the few bad notes. They’re far overshadowed by the power and purpose of the playing.”

Back in the day, the music’s main purpose was to keep the troubled teenager on an even psychological keel. A loner since childhood, Oldfield suffered with a sense of otherness, amplified by his mother’s mental illness and alcoholism. He himself came to rely heavily on the bottle, and one extremely damaging acid trip led to decades of crippling panic attacks.

‘Young Mike’, as he was known, discovered his talent for music early on. He began his career on the 60s folk circuit in acts including The Sallyangie, a duo with his vocalist sister Sally, and later joined Kevin Ayers’ The Whole World as bassist and guitarist. By that time rock’s horizons were expanding.

“In the late 60s progressive music was what everybody wanted to make. There was experimentation all over the place; we were all pushing boundaries seeing what could be done. I was very much part of the live music scene, going up and down the motorway, and we’d often be on the bill with groups like Pink Floyd, Free and even Black Sabbath. I never set out to absorb any influence, it was all just there.”

Oldfield absorbed eclectic musical ideas however: classical structures, minimalism, unusual scales and odd time signatures. A rough demo he recorded was rejected by every record label, but when he first set foot in The Manor in 1971 as bassist for Jamaican singer Arthur Louis, resident engineers Simon Heyworth and Tom Newman heard promise in the youngster’s recording. They passed it on to Manor owner Richard Branson and his business partner Simon Draper and a year later, with a disillusioned Oldfield contemplating a move to Russia for a career as a state-funded musician, he was invited to record the piece properly for Branson’s fledgling label, Virgin Records, at The Manor.

“It was a lovely big country house with a complete recording studio,” recalls Oldfield. “Lots of people running around doing things, we had a cook so I’d get great big plates of wonderful food, and I made lots of new friends.”

With instruments ranging from organs to mandolins to Cale’s bells, Oldfield set about recording his Opus One, filling 16 tracks of tape with thousands of overdubs to achieve the sound in his head. Part One was finished in one manic week, with the voice of the ‘Master of Ceremonies’ provided by Vivian Stanshall of the Bonzo Dog Doo-Dah Band, who’d arrived early for their own recording sessions. Part Two came together slowly during studio downtime over the coming months, and for its creator the whole process was cathartic.

“You can hear it in the music. It was the only time I felt sane and vaguely happy. I suppose it describes in a nutshell the anguish of teenagerhood, which most people can relate to. It personifies all that.

“Nothing can take away from the fact that I’m very, very proud of the composition, the way one idea runs into another idea and the variations of ideas scattered around the place. It’s got a great introduction, great riffs, lovely little tunes. It’s fortuitous that Viv Stanshall was there at that time, and what a good idea to put the bell in there. It all seemed to fall into place, as if some wheel of fortune had swung in my favour at that time.”

Artist Trevor Key was commissioned to design the now-iconic cover, and Tubular Bells became the inaugural release for Virgin Records on May 25, 1973. Pink Floyd’s The Dark Side Of The Moon had landed that March, and with it the progressive era was in full flow. Oldfield’s inspired, one-man symphony earned rave reviews in the press and won fervent support, notably from Radio 1’s John Peel. Tubular Bells entered the Top 10 and stayed in the album charts for five years straight. Worldwide sales were spurred further when William Friedkin selected the haunting opening section for the soundtrack of his movie The Exorcist (a film Oldfield claims not to have seen until years later), and this earned its composer the Grammy Award for Best Instrumental Composition in 1975.

Still plagued by the panic attacks and a morbid fear of flying, Oldfield refused to take the album on the road at home or in the US, despite Branson’s pleas. He did agree to one concert though, at the Queen Elizabeth Hall, but only after his boss gave him his vintage Bentley as an incentive. Oldfield also prepared a tourable, orchestral version of the album. “I didn’t like it too much,” he says now. “It was Virgin’s idea because at the time I didn’t want to go on tour.”

He subsequently tempered his demons through Exegesis therapy [the root of which is based on the idea that one’s problems are self-caused and not the fault of others] and his distinguished career has innumerable highs – the cracking 1975 album Ommadawn; his N0.4 single Moonlight Shadow with Maggie Reilly in 1983; his underrated soundtrack to Roland Joffé’s harrowing movie The Killing Fields; 2008’s acclaimed classical suite Music Of The Spheres. Yet it’s Tubular Bells – and its franchise – for which he’ll forever be known. When his original, contentious contract with Virgin Records expired in 1992, Oldfield delivered Tubular Bells II for Warner Bros. Co-produced by Trevor Horn, it was a UK No.1 hit, and just six years later the brand continued with Tubular Bells III, itself a Top 5 success. In 2000 he saw in the New Year by performing the specially commissioned work, The Millennium Bell, in front of an audience of thousands in Berlin, and the eyes of the world were on him when he played at the 2012 Olympics Opening Ceremony in London. The nerves were conquered then, but it hasn’t all been a success.

“The re-recording rights for Tubular Bells came back to me in 2003, which encouraged me to re-record it, for its 30th anniversary. That was great fun to me, but nobody else seemed to like it. I’m scared to listen to that now in case I think it was a big mistake!” That re-recording flopped, perhaps because the so-called flaws in the original had become part of its very fabric. Four years later the Mail On Sunday did a deal with EMI/Virgin to give away the CD free with the newspaper. Oldfield was furious at the time but is rather philosophical now: “It devalued it in a way. It was like saying, this music’s so old that we’ll just give it away. On the other hand it marked the end of that era and gave me the impetus to really want to remix it.”

That opportunity arose when the album’s absolute rights devolved to him in 2008. Fifty-five years old at the time of our interview, and with no new music planned, Oldfield is busy remixing his back catalogue, starting with that iconic debut. The squeaks, pops and duff notes have survived, but there’s been one high-profile casualty.

“The original bell had some distortion that was impossible to get rid of. In the mid-70s I was convinced to replace the bell with one that didn’t have distortion and I foolishly agreed, and we rubbed it off. We haven’t been able to track down the original multitrack master – I’ve been working from a copy. I was pulling out my hair thinking, what can I do? In the middle of Part One there’s a simple flute tune and in the background is the same bell. It was playing some of the right notes, so I spent days reproducing exactly the original bell using that, and with some jiggery pokery I think it’s even better than the first one now, and it hasn’t got the distortion.”

Yet he is mindful of keeping the mix in balance with the classic version.

“The beginning has a spooky feel that reminds you of things like The Exorcist, and if you clean it up too much then it doesn’t have that. I didn’t duplicate some of the production, the phasing and flanging; we were trying to be modern in 1973 – now it didn’t seem necessary. I hope I’ve done it as best as I could, I certainly enjoyed doing it. I was listening to [his 1982 album] Five Miles Out recently and I didn’t like it. I seem too tense, I was trying too hard. Tubular Bells is trying too hard, but succeeding.”

With almost four decades of perspective, the album’s creator has definite views on the reasons for its enduring success. But just be careful what you call it.

“I have got no patience for people who call it new age or who go on about it being a concept album. It’s not telling a story, there’s no concept of anything. What it does have is extremes – delicate mandolin sections, the pounding rock of the ‘caveman’ section, the next section is the dreamiest little piece. Also I think people miss the humour in it. There’s a honky-tonk piano with drunken people humming along, the Sailor’s Hornpipe, it’s got that Monty Python silliness. There’s been nothing like it, before or since.”

This feature originally appeared in issue 2 of Prog Magazine.