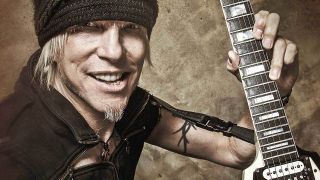 Michael Schenker has talked on camera about the time he was asked to audition for The Rolling Stones. The guitarist, who last week was confirmed as one of the headliners of the HRH XII festival in November, was approached shortly after he arrived in London to join UFO in 1973.

In the video, Schenker reveals how he took a call on his landlady’s telephone two months after joining UFO, and was asked if he’d be interested in trying out for the Stones. After speaking to older brother and Scorpions guitarist Rudolf Schenker in Germany, he decided not to return the call.

In the video, Schenker explains his reasoning, and reveals that the man who eventually got the Rolling Stones job, former Faces man Ronnie Wood, is actually a big Michael Schenker fan.

Schenker will also headline Rock City Stockholm on April 28, after completing a North American tour in March and April. Full US dates listed below.

New single Warrior is now available from the Nuclear Blast Store. Resurrection is released on March 2, and can be pre-ordered now.

Michael Schenker - A Decade Of The Mad Axeman album review