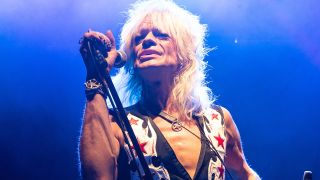 Michael Monroe has slammed some of the hair metal bands of the 80s, saying they gave real rockers a bad name.

The former Hanoi Rocks frontman was an influence for many of that decade’s glam bands, and asked by 2Fast2Die if that was something he welcomed, Monroe says: “Well, it’s always nice to be recognised!"

He adds: “I guess it bothers me that most of those bands missed the point. They were more into their hair and partying than they were the music. The music and the attitude were always more important to me. Anybody can party and pose and act like an idiot.

“A lot of those bands sold millions of records, but they acted like morons and gave real rockers a bad name. It’s almost embarrassing that people might think I would be like that."

“I’ve never been with a groupie my whole life. I’ve just never been into that whole scene. I guess growing up in Finland gave me a different mentality.

Earlier this week, it was revealed that Monroe would headline the UK’s Call Of The Wild festival in May 2020, with the vocalist recently releasing his new studio album One Man Gang through Silver Lining Music.