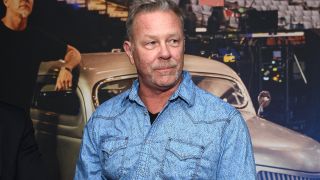 Metallica’s James Hetfield will release a new book later this year based on his collection of customised classic cars.

It’s titled Reclaimed Rust: The Four-Wheeled Creations Of James Hetfield and it’ll be published on July 28. The book is named after Hetfield’s Reclaimed Rust exhibition that was recently held at the Petersen Automotive Museum.

The synopsis of the coffee table book reads: “James’ lifelong passion of restoring and customising classic cars into incredible pieces of art has been documented by acclaimed automotive photographer Scott Williamson at Photodesign Studios, who was specially commissioned to bring the cars to life.

“From the Skyscraper to the Aquarius, to the Black Pearl and beyond, the stunning photos are accompanied by insight from James as to how they were crafted, creating a diary of another phase of his life.”

Reclaimed Rust: The Four-Wheeled Creations Of James Hetfield is now available to pre-order. Find details below.

At his exhibition, Hetfield showed off 10 of his vehicles, including his 1948 Jaguar ‘Black Pearl’ and his 1937 Lincoln Zephyr ‘Voodoo Priest’ along with a selection of Metallica items and memorabilia.

In a video released by the museum, Hetfield explained: “Reclaimed Rust to me means that old guitar, sitting there with songs still in it, waiting for someone to pick it up and breathe life into it again – and I’ve done that with many of these cars.

“I’ve seen cars sitting in a field in Kansas and thinking, ‘They’ve got a story to tell – let’s bring this thing back to life.”