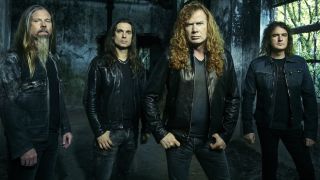 Dave Mustaine wants to keep Chris Adler with Megadeth for as long as possible – but he’s being careful not to cause any problems with the drummer’s main band, Lamb Of God.

And he’s delighted that the stand-in chosen by Adler happens to be available to play all the shows he’ll be needed for.

Adler appeared as guest musician on Megadeth’s latest album Dystopia, and he’s committed to playing as many shows as he can with the thrash icons.

But despite having been a fan of Mustaine all his life, he has no plans to leave Randy Blythe and co.

Mustaine tells WSOU: “We’re really happy that the guys in Lamb Of God aren’t protesting him playing with us. We don’t want to cause any problems in that camp.

He continues: “It would be great if Chris could do every single date, but there’s going to be some he can’t. For those, we’ve got a drummer that Chris picked. Tony Laureano played with Nile and Dimmu Borgir. He’s a great guy.

“He’s got a couple of solo things that he’s doing, but fortunately for us, it works out that he’s available for the shows that Chris is out with Lamb Of God.”

Asked about the possibility of Adler appearing on the next Megadeth album, Mustaine says: “I think it’s too early to say, but my hunch is that the answer would probably be ‘yes.’ I think Chris wants to do it. I have no reason not to have him do it.

“It was really inspiring being around him. It was good for me, it was good for the band. The drum position is his if he wants it – until we get into a position where we have to make a decision otherwise.”

Meanwhile, Megadeth have confirmed the release of a limited-edition picture disc set to tie in with Record Store Day on April 15. The set includes Peace Sells… But Who’s Buying?, Youthanasia, So Far, So Good, So What, Rust In Peace, Countdown To Extinction and Dystopia.

The band are currently touring the US and return to Europe in June, including an appearance at this year’s Download festival at Donington on June 11.