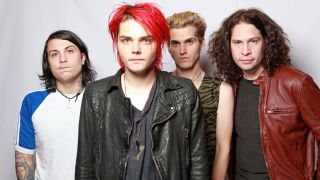 Tracks by MCR, Green Day, Black Veil Brides and Fall Out Boy are among the first wave of songs to be announced for the game’s latest incarnation – Guitar Hero Live. The popular video game has been on hiatus for five years but will return on PlayStation 4, PlayStation 3, Xbox One, Xbox 360 and Wii U via Activision and developer FreeStyle Games later this year.

Speaking at the game’s launch event , Way, pictured below, told Rolling Stone: “When we were making Black Parade, we had a TV set up in the big room and we had Guitar Hero there. We’d just pick it up at any time and play.

“It influenced me for the music that would come out after that album because I would constantly play Search And Destroy by Iggy Pop And The Stooges all the time. It rekindled something for me. It’s one of the reasons why Conventional Weapons has such a protopunk sound to it.”

My Chemical Romance split in 2013 and Way and guitarist Frank Iero have gone on to launch solo careers.

Guitar Hero Live will be released this autumn and retail for £89.99.