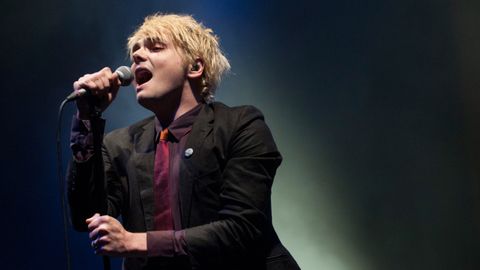 On a cold, wet, midweek January night, Gerard Way and his new band the Hormones are trying to start a love riot in Southampton.

Promoting his so-so debut album Hesitant Alien with his second British mini-tour in the space of three months, Way is pulling significantly smaller crowds than during his My Chemical Romance pin-up peak. Even so, his screaming female fans are out in force, showering him with socks and flowers. And the singer works hard to repay their loyalty. A woman who comes dressed as Lola, Way’s monkey-faced pink mascot, is rewarded with an invitation to join him onstage.

Hurtling, hand-clapping, punk-pop riff-slammers like Action Cat and Millions blast along with an adrenalised energy that nudges Way into Green Day territory. But his less frenetic, more glam-tinged numbers evoke a Britpop hinterland including Suede and Blur. Nothing here quite touches the anthemic swagger of MCR in their prime, so it seems oddly self-defeating that Way completely ignores his old band’s songs, especially since his slender current repertoire barely fills 70 minutes on stage.

Besides the Hesitant Alien tracks, Way plays a handful of new tunes including the heart-tugging power ballad Piano Jam and a raunchy, raucous, party-rocker called Kidnapper. The singer’s post-MCR career plan is clearly still a work in progress, but these are promising pointers for a second solo album.