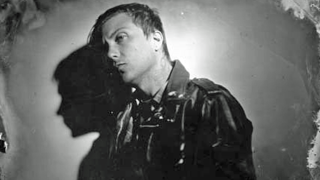 Frank Iero says an old typewriter and one of his shoes helped give his upcoming debut solo album its distinctly DIY sound.

The former My Chemical Romance guitarist releases Stomachaches on August 25, under the moniker Frnkiero And The Cellabration.

It was recorded entirely in the basement of his New Jersey home, with all of the instruments played by Iero himself, apart from drums which were handed by fellow former MCR man Jarrod Alexander.

He tells MusicRadar: “It’s a very small, makeshift studio, but it’s perfect for me. For some songs, like the guitars on Stitches, those are the original demo guitars. I didn’t want to try and artificially re-create a moment in time. Those guitars were one-take tracks of me trying to figure out what the song wanted to be, and they just ended up feeling right. Even the ‘mistakes’ felt correct somehow.

“The fact that I got to dictate every nuance was exciting. I could pick and choose and save all the mistakes. If it didn’t come from my head or my heart, it didn’t get on the record. That was an experience I’ve never really had before, and I really liked it.”

Iero used whatever came to hand to create the record’s purposefully lo-fi sound – including an old typewriter and even one of his shoes.

He adds: “There’s some samples I recorded of different non-instruments that I incorporated into beats, like the clicking of an old typewriter and me banging on an old tech box with a shoe.”

Frnkiero And The Cellabration begin a 25-date North American tour on August 25, while Way will play at Reading and Leeds this weekend.