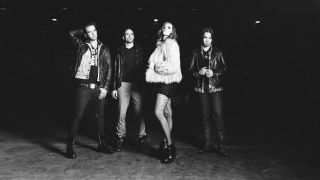 Halestorm singer Lzzy Hale has apologised to her mum over the content on the band’s upcoming third album.

The singer jokes that the record’s subject matter might give her mother reason to blush, saying that rather than stray from their signature sound, the band have gone “further down the rabbit hole of everything that is Halestorm.”

They’ll issue Into The Wild Life on April 6 via Atlantic Records.

Hale tells 98 Rock: “There’s some craziness on this new record. People kept guessing, ‘Okay, you’ll stray from who you are, because it’s your record.’ And I’m like, ‘No, no, no.’

“It’s the complete opposite. It’s just further down the rabbit hole of everything that is Halestorm. So, I apologise ahead of time, because there’s a lot of truth to this record. I apologise to my mom.”

This month the band released single Apocalyptic. The track is taken from the upcoming record and Hale says it’s a good indication of what fans can expect on the album.

She adds: “It was one of the most fun songs to do on this record. And I felt like it was important to have a song like this, especially coming right out of the gate, because it’s a great, happy medium between where we left off and where we’re going.”

Halestorm tour the UK in March with support from Nothing More and Wilson.

INTO THE WILD LIFE TRACKLIST