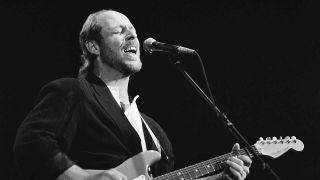 Little Feat guitarist Paul Barrere has died at the age of 71.

The news was confirmed by Little Feat on their website, in a post that read: "It is with great sorrow that Little Feat must announce the passing of our brother guitarist, Paul Barrere, this morning at UCLA Hospital. We ask for your kindest thoughts and best wishes to go out especially to his widow Pam and children Gabriel, Genevieve, and Gillian, and to all the fans who were his extended family.

"Paul auditioned for Little Feat as a bassist when it was first being put together – in his words, “as a bassist I make an excellent guitarist” – and three years later joined the band in his proper role on guitar. Forty-seven years later, he was forced to miss the current tour, which will end tomorrow, due to side effects from his ongoing treatment for liver disease.

The post continued: "He promised to follow his doctor’s orders, get back in shape, and rock on the beach at the band’s annual gathering in Jamaica in January 2020.  'Until then,' he wrote, 'keep your sailin’ shoes close by…if I have my way, you’re going to need them!'

"As the song he sang so many times put it, he was always 'Willin’, but it was not meant to be. Paul, sail on to the next place in your journey with our abiding love for a life always dedicated to the muse and the music.  We are grateful for the time we have shared."

Tributes from fellow musicians included notes from Nils Lofgren, who tweeted, "Rest In Peace my friend. You’ve blessed us all with a lifetime of inspired, soulful music", and Bonnie Raitt, who wrote "Oh my God. I just heard about the passing of another dear friend, Little Feat's Paul Barrere. A brilliant guitarist, singer and songwriter – a cornerstone of one of the greatest bands of all time."

Barrere was born in Burbank, California in July 1948. He attended high school with Little Feat founder Lowell George, and went on to join the band in time for their third album, Dixie Chicken. He played on all of Little Feat's subsequent releases.

“We were a freight train comin atcha – kickin’ ass, Barerre told Classic Rock. "We were always opening slots and blowing people off.

"Thing was… Little Feat weren’t showmen; we didn’t have a catalogue of hits. We just played... It was so eclectic that we could be out of our skulls and still function. It was nirvana on stage, and it was funny. We were tongue-in-cheek with our stage props. We didn’t think: this is serious art."

When Little Feat's went on hiatus after the death of Lowell George, Barerre led the group Chicken Legs, who released one album with blues musician Catfish Hodge, and made two solo records: On My Own Two Feet in 1983 and Real Life the following year.

Barrere was diagnosed with Hepatitis C in 1994, and with liver cancer in 2015. Earlier this year he told Jambase, "Hey man, I get up in the morning, I read the obituaries, and if I’m not in them? I’ll make myself a coffee."

Rest In Peace my friend. You’ve Blessed us all with a lifetime of inspired, soulful music. #Paul Barrere pic.twitter.com/5jHJxO9ge0October 27, 2019

(1/2) Oh my God. I just heard about the passing of another dear friend, Little Feat's Paul Barrere. A brilliant guitarist, singer and songwriter---a cornerstone of one of the greatest bands of all time. #PaulBarrere pic.twitter.com/vS4rqXhD4JOctober 27, 2019