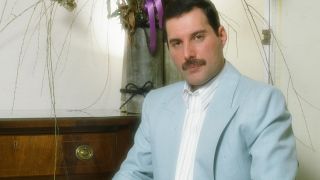 The multi-track, big production song was created for the concept album based on Dave Clark’s musical of the same name and released as a single on May 6 that year.

However, looking to get back to the essence of the track which featured just Mercury on vocals and Mike Moran on piano, Clark dusted off the track in the spring of 2018, inviting Moran back into the studio to record a new piano piece.

The result is a stripped-back version of the song titled Time Waits For No One, which is more reminiscent of the original studio version before the 96-tracks of backing vocals by Mercury, John Christie and Peter Straker were added.

As for the video, Clark rooted out the negatives from the original four-camera shoot (below) along with unprocessed film and spent four days with his editor to produce the new video.

Reflecting on the original recording session, Clark says: “We got on great. If I didn’t like something I’d say, and vice versa. We were both aiming for the same thing – to make something special.”

A statement on today’s release concludes: “Time Waits For No One is a tribute to the musical force of Freddie Mercury; the performance, the drama, the vocal range, and after four decades waiting in the wings, is finally out for new and old fans alike.

"A stunning eulogy to the Queen frontman, produced and directed by one of his closest friends.”

The track has been released through Virgin EMI/Universal Music Group.