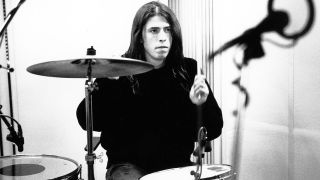 He’s one of the most recognisable faces in the rock world thanks to his work with Nirvana and Foo Fighters, but back in 1985, Dave Grohl was a little-known drummer in DC punk band Mission Impossible.

That year, the group recorded the track Now I’m Alone – and it’s now emerged online after it was revealed it would appear on the soundtrack to upcoming documentary Salad Days: A Decade Of Punk.

The film will explore the early DIY punk scene in Washington DC between 1980 and 1990 and will also feature bands including Fugazi, Minor Threat and Bad Brains.

“I went to several of their practices in Virginia and just sat back and watch them go nuts. They were all superb musicians and watching Dave behind the drum kit was always a thrill.”

As for the soundtrack, Crawford says: “I chose these bands because they were all important bands from DC, whose music defined the era for me. Plus, I felt like their music would resonate now with listeners all around the world. At its core, this music is timeless.”

The film will launch on December 10, with pre-order details available below.

Salad Days: A Decade Of Punk
Writer and director Scott Crawford delves into the punk scene in Washington DC between 1980-1990 in this film featuring bands including Fugazi, Minor Threat and Bad Brains.View Deal