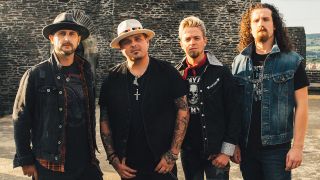 The song has been taken from the Kentucky favourites’ upcoming EP Back To Blues Volume 2, which is set to arrive on November 1 through Mascot Label Group/Mascot Records.

Black Stone Cherry previously released their cover of Robert Johnson’s Me And The Devil Blues.

The band say: “We have played a few different versions of this song live for several years. To finally be able to go in the studio and actually record it was an incredible experience and we got to extend the live version and have a lot of fun.

“Son House is without a doubt one of the most haunting artists of all time, blues or any genre. We can only hope we did the song and him justice.”

As for the EP, vocalist and guitarist Chris Robertson adds: “We could have never dreamed of the reaction we got from 2017’s Black To Blues. It was amazing to have such a positive reaction to our take on some of our biggest influences in music.

“Now we are back for round two and we have added our great friend Yates Mckendree on organ/keys and he also makes an appearance on guitar."

Black Stone Cherry will play at this coming weekend’s Exit 111 Festival before embarking on further US shows.

Black Stone Cherry: Back To Blues Volume 2
1. Big Legged Woman (by Freddie King)
2. Me And The Devil Blues (by Robert Johnson)
3. All Your Love (I Miss Loving) (by Otis Rush)
4. Down In The Bottom (by Howlin’ Wolf)
5. Early One Morning (by Elmore James)
6. Death Letter Blues (by Son House)