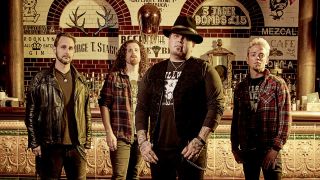 Black Stone Cherry have announced that they’ll release the Back To Blues Volume 2 EP later this year.

The follow-up to their original 2017 EP will arrive on November 1 via Mascot Label Group/Mascot Records and will feature six tracks that pay tribute to the band’s blues heroes.

To announce the news, Black Stone Cherry have released a video for their take on Robert Johnson’s Me And The Devil Blues.

The band say: “We chose this song because we have such an appreciation for Robert Johnson and his music. It was so simple, direct, and eerie in a way that just resonates with the listener.

“Since Robert’s music was guitar and vocal, we decided to totally write new music and lay his words on top of it. All of the music was written literally on the spot while recording in the studio! We are very proud of how this track came out!”

As for the EP, vocalist and guitarist Chris Robertson adds: “We could have never dreamed of the reaction we got from Back To Blues. It was amazing to have such a positive reaction to our take on some of our biggest influences in music.

“Now we are back for round two and we have added our great friend Yates Mckendree on organ/keys and he also makes an appearance on guitar."

He adds: "We kept a couple artists in the lineup from last time and introduced a few others into the mix as well. We can’t wait for everyone to hear and feel how much fun we had recording this project.”

Black Stone Cherry will head out on the road with Alice Cooper across Europe later this month.

Black Stone Cherry: Back To Blues Volume 2
1. Big Legged Woman (by Freddie King)
2. Me And The Devil Blues (by Robert Johnson)
3. All Your Love (I Miss Loving) (by Otis Rush)
4. Down In The Bottom (by Howlin’ Wolf)
5. Early One Morning (by Elmore James)
6. Death Letter Blues (by Son House)