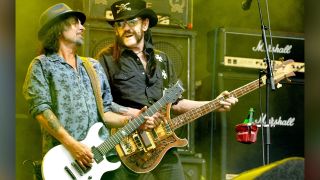 Motorhead guitarist Phil Campbell wants Lemmy’s fans to celebrate his life rather than mourn his death.

The Motorhead icon died at the age of 70 on December 28, two days after being told he was suffering an aggressive form of cancer.

Drummer Mikkey Dee has already confirmed that Motorhead died with him, adding: “The band will live on in the memories of many.”

Campbell says: “I’m still trying to come to terms with everything, but I’ve been totally overwhelmed with the well-wishes and stories about how Lemmy and Motorhead affected people’s lives.

“I would like to thank everyone who’s supported Motorhead over the last 40 years. Please turn it up to 11 and celebrate Lemmy’s life to the full.”

Steve Luna, who’d been the mainman’s bass tech for the past 10 years, tells Billboard: “I went and saw him – I was there an hour before everything went down. Just gave him a giant hug and thanked him for everything.

“He did a lot for me. I’ve toured with many musicians, but Lemmy I held in high regard. It was like losing a family member.

“He lived a long time, he drank, he did what he did. We’re talking 50-plus years that he survived in the industry – most people can’t. Lemmy lived for the music and the music only.”

Moviemaker Wes Orshoski, who co-directed the 2010 documentary Lemmy, remembers another side to the rock icon. He says: “I don’t think of the plume of smoke, or the cigarette expiring between his fingers, or the fruit machines or the whiskey – not even the jet-engine roar of Motorhead live. Not at first, at least.

“I think of reading glasses on the tip of his nose, three or four books open on a backstage table, or notepads full of doodles of spiders and swordsmen.”

He recalls his last meeting, which took place in New York in September during what would be Motorhead’s final tour. “He was frail, wheezing a lot, and he clearly didn’t want to talk about his health,” says Orshoski.

“Like a lot of people, I feared this would be the last time I would see him, and in the end it was. I gave him a hug – I’m sure he was uncomfortable, but I didn’t care – and I told him I loved him. And I’m glad I did. It was the last thing I ever said to him.”

Lemmy took cancer news better than all of us - manager