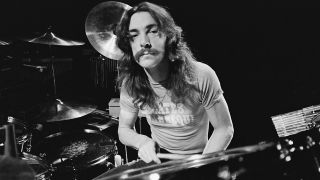 A permanent memorial to Rush’s Neil Peart at Port Dalhousie’s Lakeside Park has been given the go-ahead by St Catharines city council.

A petition to have a statue or plaque dedicated to the late Rush drummer at the spot made famous by the band’s 1975 track gathered thousands of signatures in January, with Peart’s family said to be “fully on board” with the idea.

The St Catharines Standard report that more than 80% of residents voted online and chose the Neil Peart Pavilion over the Lakeside Park Pavilion.

Port Dalhousie Councillor Bruce Williamson said: “The public voting on naming is obviously fairly conclusive. Neil Peart's been one of our most famous local individuals and a lot of his songs have local roots, including the namesake park.”

The initial petition was started by Tony McLaughlin who said: “Neil spent a lot of his youth in Port Dalhousie as can be heard in the famous song he penned Lakeside Park. What an amazing tribute it would be to him to have this placed there.

“We're all very proud of his accomplishments after he made that fateful audition in Toronto back in the 70s. If we all pull together, we can make this happen.

“With his untimely passing, this needs to be done even more so now. Please sign the petition, and let's all make some change. Thank you.”

Peart’s death was announced on January 10, with a statement from Rush saying the 67-year-old died on January 7 after a three and a half year battle with brain cancer.