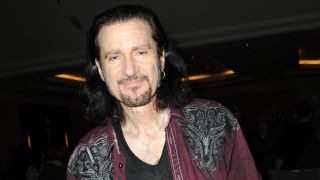 He was part of the band for 12 years from 1983 and featured on albums Carnival Of Souls, Revenge, Hot In The Shade and Asylum. He left when the band put their trademark masks back on, reuniting the classic lineup of Paul Stanley, Gene Simmons, Peter Criss and Ace Frehley.

Kulick tells Natalia Britt: “People that aren’t fans will only think of makeup Kiss, because that’s what made them famous, and they’ve been back in that for so many years.

“But a real fan knows there’s a whole wealth of material that’s non-makeup. I kind of wave the flag for all of that.”

He adds: “There wouldn’t have been a version for me to join if it wasn’t for the makeup. But when I was in the band, we kept it going, we had hits, we had platinum records, toured the world – the whole thing.”

And even though he left the group almost 20 years ago, he still benefits from his time with Kiss. “They turn on new generations of fans,” he says.

“They were in Japan not that long ago, and now they’re going to South America. I’m seeing a lot of people following me on Twitter and Facebook from South America.”

Kiss headline this year’s Download festival at Donington on June 12-14.