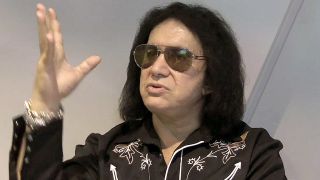 Kiss star Gene Simmons has outlined how he’d like the band to bow out when the time comes – and the notoriously astute businessman even thinks the event might be free of charge.

He believes they have a few more years left in them, but he accepts they can’t go on for ever, and hopes they’ll quit in style.

“We’ll do it the right way, with a big party. I’d like to think we’d do something that rocks the planet, something big and worldwide – and maybe free.”

In the meantime, he’s still loving every minute of Kiss, and he insists he’d never work with any other band, no matter what size they were.

“‘Gene, you can be in Radiohead.’ No. ‘You can be in Oasis.’ No. ‘Do you like them?’ Yeah, I love them. But I get to wear higher heels and more makeup than you do. I get to spit fire I get to work my ass off every single show.

“It’s the word ‘pride.’ If you can keep the fire in your belly after 44 years and still care about the next show, you’ve got something.”

Earlier this month, Simmons revealed he had been writing new Kiss material – but that the lack of profit from releasing music meant he wasn’t “incentivised” to take the ideas further.

The band had to cancel their show at Manchester Arena this week in the wake of the terrorist attack at the venue earlier this month. They complete their current run of UK dates in London on May 31, before a handful of appearances in North America – full list below.

The Trump or Simmons Quiz: Who said it?

Dysfunctional Days & Crazy Nights: The Epic Story Of Kiss In The 80s