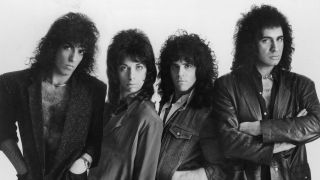 For a band that always played it smart – no matter how dumb some of their music was – Kiss really blew it when they named their 1980 album Unmasked before they actually took off their famous facepaint. But when that monumental event happened three years later, with the album Lick It Up, Kiss proved what their fans had known all along – that this was a great rock’n’roll band, not just a bunch of circus clowns.

In their non-make-up era, from 1983 to 1997, Kiss made seven albums, including the major hit Crazy Nights and ending with Carnival Of Souls, a dreadful grunge-influenced record that was shelved in 1996 when the original and classic Kiss line-up of Paul Stanley, Gene Simmons. Ace Frehley and Peter Criss reunited and put the slap back on.

In this period, Stanley and Simmons were the sole constants, and by Simmons’ own admission it was Stanley who carried the band. While Simmons was distracted by a parallel career in acting and launching his own record label, Stanley wrote and sang the hits that kept Kiss alive at the height of hair metal in the 80s and into the grunge-shaken 90s.

Three different lead guitarists played with Kiss in this era: first Vinnie Vincent, then Mark St. John, and finally Bruce Kulick. Drummer Eric Carr, who played on every Kiss album from 1981 to 1989, died from heart cancer in 1991 on the same day that Freddie Mercury passed away. Carr’s replacement, Eric Singer, played on Revenge (1992) and Carnival Of Souls (belatedly released in 1997), and has been a permanent member of the band since 2003.

Here, we present the Top 10 Kiss Without Make-Up Songs.

Paul Stanley wrote some great pop rock songs for his 1978 solo album and for the Kiss records Dynasty (1979) and Unmasked (1980) – songs such as Tonight You Belong To Me, Sure Know Something, Shandi and Tomorrow. Another was Turn On The Night, written with Diane Warren, author of 80s hits including Nothing’s Gonna Stop Us Now by Starship and Rhythm Of The Night by DeBarge.

And while Turn On The Night was not a hit, peaking at number 41 in the UK and not even charting in the US, it deserved better. It is Kiss gone AOR, with keyboards high in the mix, Stanley singing brilliantly, and Simmons adding his unique tone to a euphoric chorus. The only bum note is Bruce Kulick’s naff pinched harmonics in the verses.

Bob Ezrin – the producer of Alice Cooper’s best albums, Pink Floyd’s The Wall and Lou Reed’s Berlin – always got something special out of Kiss. Destroyer, the band’s first album with Ezrin, released in 1976, was their masterpiece. Music From The Elder – their doomed concept album from 1981 – was both their greatest folly and the most daring album of their career. And with Revenge in 1992, Ezrin inspired a comeback for Kiss at a time when grunge reigned supreme.

Every Time I Look At You, a Paul Stanley song co-written with Ezrin, was close in spirit to Peter Criss’ classic ballad Beth. The similarity between the two songs was emphasised in the orchestral arrangement that Ezrin created. And the guitar solo was from the producer’s go-to guy – the late, great Dick Wagner.

The Asylum album was home to arguably the daftest of all Kiss songs – Uh! All Night. Amazingly, it took three people to write that song: Paul Stanley, Jean Beauvoir (the flamboyant, Mohican-sporting ex-Plasmatics guitarist) and Desmond Child (the legendary ‘hit doctor’ and co-author of the controversial Kiss disco cash-in I Was Made For Lovin’ You).

But the best song on Asylum was one that Paul wrote alone, Tears Are Falling. It’s ultra-melodic yet heavy with it. The chugging riff was reminiscent of Lick It Up, but the emotion in Paul’s lyrics and voice came from a different place.

The opening track on Revenge was a powerful statement of intent: one of the heaviest Kiss songs of any era, in which Gene Simmons, as lead vocalist, projected the kind of menacing aura that had made God Of Thunder his signature song. But unlike God Of Thunder – which had been written by Paul Stanley – Unholy was Gene’s song, albeit with a co-writing credit for Vinnie Vincent, the guitarist who had been fired from the band almost a decade earlier.

“Vinnie and I wrote the lyric together,” Simmons said. “He twisted the song inside out.” The result was a song as dark in word as in music, with Simmons musing upon the inherent brutality of mankind, grimly intoning: “You send your children to war/To serve bastards and whores/So now you know/You created me/On the day that you were born.” From a man who had phoned it in for a decade, this song was a monster.

Paul Stanley wrote this power ballad with a master of the art – AOR cult hero turned vanilla soul superstar Michael Bolton. And it paid off when Forever sailed into the US top ten in 1989 – the band’s first major hit since I Was Made For Lovin’ You ten years earlier.

Originally featured on Hot In The Shade, a patchy album, Forever was a song that Stanley put his heart and soul into. It also had a tasteful acoustic solo from Bruce Kulick. But the definitive version is on Alive III, with Paul’s introduction: “Every time we do this one, the place lights up like a damn Christmas tree!”

It was also far and away the best thing on the Animalize album – the only Kiss record to feature lead guitarist Mark St. John, who was forced to leave the band after contracting Reiter’s Syndrome, a form of arthritis.

This is one that got away, a wonderfully camp AOR classic that was only a minor hit. Paul wrote it with his old friend Desmond Child and another hit writer, Holly Knight.

The first artist to record the song was Bonnie Tyler, and by the time the Kiss version surfaced on Hot In The Shade it was also featured on their ex-guitarist Ace Frehley’s album Trouble Walkin’. But the Kiss version was the best. The story in the song – a Latin love-and-death triangle – had a whiff of Barry Manilow’s Copacabana. And Paul sang it with real feeling.

Kiss took a great song and made it their own with God Gave Rock ‘N’ Roll To You II – their remake of the Argent track, written by Russ Ballard and originally released in 1973. Kiss recorded it for the soundtrack to the sci-fi comedy movie Bill & Ted’s Bogus Journey, but only after rewriting lyrics that they considered nonsensical. ]

As Paul Stanley said of the Argent version: “I don’t know what the hell the song was about – they were singing about flowers, trees and snakes.” Kiss made it into an anthem about the life-affirming power of music, with a brilliant vocal arrangement that proved how much they had learned from The Beatles.

Some songs pretty much write themselves, and so it was with Crazy, Crazy Nights. Once he had the title, Paul Stanley wrote the chorus in minutes, and the rest of the song came together quickly with Adam Mitchell, who had co-written previous Kiss songs on a nocturnal theme, I’m A Legend Tonight and Creatures Of The Night.

In 1987, with hair metal at its peak, the high-energy vibe and no-brainer appeal of Crazy, Crazy Nights made it the band’s joint-biggest UK hit – peaking at number four, as God Gave Rock ‘N’ Roll To You II would do four years later. What’s more, in the lyrics in Crazy, Crazy Nights, Paul preached to the converted in stupidly brilliant fashion: “They try to tell us that we don’t belong/But that’s alright, we’re millions strong/You are my people/You are my crowd/This is our music/We love it loud.” Right on, Starchild!

When Kiss took off the make-up that was so fundamental to their identity, their USP, they needed a big song to prove they could still cut it. They delivered it with Lick It Up – an anthem that was quintessentially Kiss. According to guitarist Vinnie Vincent, who wrote the song with Paul Stanley, it took a while for Paul to realise the potential in it. As Vincent said: “Paul didn’t seem excited about it.

But when Gene heard it he said, ‘You should play it for Paul.’ And the next time I played it for Paul he said, ‘God, that’s great!’” Paul himself remembered it differently. “Lick It Up was written by Vinnie and I at my place in New York,” he said. “And I thought it was important to know what we were going for and to have a game plan.” But whatever the truth of how the song was conceived, the end result was hugely important to the band’s career.

With its catchy, throbbing riff and titanic chorus, Lick It Up had the same celebratory tone as the band’s defining 1975 track Rock And Roll All Nite. And while Vinnie Vincent would never make another album with Kiss, this song was pivotal to the band’s reinvention. It is one of the great rock anthems of the 80s, and one of all the all-time great Kiss songs.