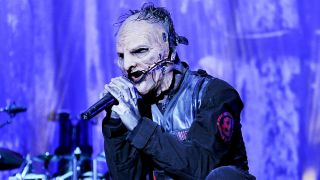 Corey Taylor says the firing of Slipknot drummer Joey Jordison was one of the most difficult things the band have ever faced – but insists it had to be done.

And he’s described the group’s current status as a “2.0 kind of situation.”

They parted ways with him in December 2013 as they were gearing up to make* .5: The Gray Chapter* – their first album since the death of bassist Paul Gray in 2010.

Taylor tells Living Out Loud LA: “It was hard at first. Nothing worth doing is ever easy right out of the gate.

“When we parted with Joe it was honestly because of necessity. He was going one way and we were going another, and we just couldn’t go that way any more.

“But they’re very respectful, and that’s huge for us. That has made it a little easier for us.”

Slipknot launch a European tour in January and return to the UK in February.