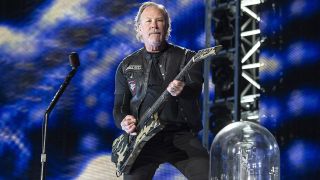 Metallica’s James Hetfield has reflected on the final mix of their 1988 album …And Justice For All and says the lack of bass on the record wasn’t a deliberate move to undermine Jason Newsted.

It was the first record to feature the bassist following the death of Cliff Burton in 1986. But while the album features classic tracks including Blackened, One, Harvester Of Sorrow and Dyers Eve, it’s also famous for the bass being pushed back in the mix.

Asked in a new interview by So What! if Newsted ever talked to him and drummer Lars Ulrich about the bass sound, Hetfield says (via Blabbermouth): “He probably did. I don't know what my answer was then, but it was kind of done. I mean, I will say, it was not all about, 'Fuck him. Let's turn him down.' That's for sure.

“We wanted the best-sounding record we could make. That was our goal. We were burnt. We were frigging fried. Going back and forth, playing a gig, no earplugs, no nothing – you go back into the studio, your hearing is shot.

“So I know that played a bigger part than any hazing or any ill feelings towards Jason, for sure. We were fried. We were burnt.”

“You can remaster it, yes, but why would you remix something and make it different? Not that I'm comparing us to the Mona Lisa, but it's, like, 'Uh, can we make her smile a little better?’ Why?”

Speaking more than 10 years after the release of …And Justice For All, Newsted said: “I was so disappointed when I heard the final mix.

“I basically blocked it out, like people do with shit. We were firing on all cylinders, and shit was happening. I was just rolling with it and going forward. What was I gonna do, say we gotta go remix it?”

In November last year, Metallica released a deluxe edition of ...And Justice For All, while they'll return to the road later this week on the latest leg of their mammoth WorldWired tour.