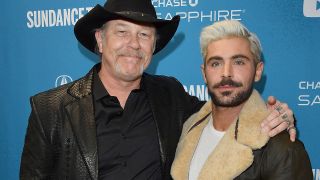 The film will hit Netflix tomorrow (May 3) and stars the Metallica vocalist and guitarist in his first film appearance as Officer Bob Hayward.

Efron, who plays the American serial killer, was a guest on Jimmy Kimmel Live! last night, when the host asked him about Hetfield.

Efron replied: “He comes on the set – and it's one of the more pivotal moments. It's the moment that Ted actually got caught for the first time. He ran a stop sign and James Hetfield plays the policeman that picks him up.

“James Hetfield, to his credit, he came and absolutely nailed the part – he just crushed it. It's like he’s been acting his own life. He had no fear. He did a great job.

Efron added: “When I got pulled over by James Hetfield, it was like a dream come true!”

The Joe Berlinger-directed movie premiered at the Sundance Film Festival in Utah earlier this year, with Hetfield and Efron joined in the cast by Lily Collins.

Metallica are currently on tour across Europe, with their next show taking place on Friday evening in Madrid.