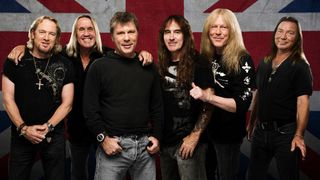 Iron Maiden have reported success in the war against ticket touts and counterfeiters.

The band have long campaigned against inflated prices on the secondary market and in 2015 joined Radiohead and Foo Fighters in an open letter to the UK government calling on them to crack down on secondary sales.

And last September, just before Iron Maiden announced their first UK arena tour in six years in support of latest album The Book Of Souls, they introduced ‘paperless ticketing’ to ensure fans were able to buy tickets at the intended price.

Now figures show just how effective the move has been.

A statement reads: “In November 2010 when tickets went on sale eight months in advance for Maiden’s 10-date 2011 summer UK arena tour, 6294 tickets appeared overnight on three of the biggest secondary ticketing platforms – Viagogo, Seatwave and Getmein – compared with just 207 tickets in 2016, all of which were listed only on Viagogo.

“With secondary ticketing much more developed now, the difference is probably much greater.”

It’s also been confirmed that of those 207 tickets, the majority were identified as bogus, with authorities now investigating the matter further.

Iron Maiden’s manager Rod Smallwood says: “We are delighted that the paperless ticketing system and other measures we instigated here in the UK have proved a massive deterrent to touts and counterfeiters.

“We want to thank our fans for their enduring support and patience. We appreciate that our stringent policy has meant fans having to jump over one more hurdle in the ticket-buying process but the results speak for themselves and I think everyone can agree this was well worth it.”

He continues: “On the first day of public sale, we sold over 100,000 tickets nationwide direct to genuine fans through the proper legitimate channels.

“This is an incredible achievement and victory for concert-goers, not least as this is a full 12 date UK tour we’re undertaking. We’ve calculated that around £1 million worth of mark-up on tickets, is not sitting in the hands of touts, but instead the tickets are sitting in the hands of the fans at the correct price. We think that is a great result and makes all our efforts worthwhile.”

Nigel Adams MP, chair of the parliamentary group on music, was quick to commend Iron Maiden on the results.

He adds: “For too long, genuine fans have been fleeced by professional, well organised and greedy large scale touts who use secondary ticketing sites to profiteer. With both industry and government beginning to take action against the touts, I am hopeful we will see a fairer ticketing industry sooner rather than later.”

Iron Maiden will embark on their The Book Of Souls European tour at the end of April. Find a full list of tour dates below.

The Iron Maiden Quiz: how well do you know Number of the Beast?