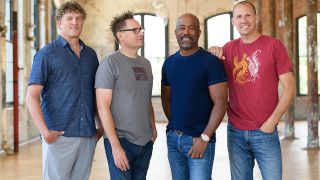 Hootie & The Blowfish have announced that they’ll release their first album in almost 15 years on November 1.

The follow-up to 2005’s Looking For Lucky is titled Imperfect Circle and it’ll launch through Snakefarm Records, with pre-orders getting under way from September 6.

The band say: “It’s cool that Imperfect Circle kinda has the same ring to it as 1994 debut album Cracked Rear View. You’re looking back and you realise nobody’s journey is perfect, but here we are – we’re all still here and I think a lot of people can relate to that.”

Drummer Jim Sonefeld adds: “Finding the right name is always the most fun for us. We sat around the studio for six months throwing out names that were either just dumb, funny, perverse or whatever – and that’s part of the fun we’ve always had.”

In addition to revealing the album news, Hootie & The Blowfish have also revealed that they’ll play dates in the UK and Ireland later in the year, following their run of North American performances which will kick off at the end of August.