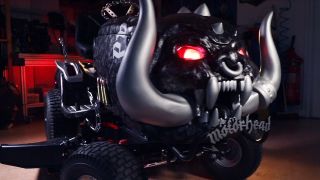 Drummer Mikkey Dee has helped design a Motorhead lawnmower that is quite possibly the most metal thing you’ll ever see in a garden.

The former Motorhead drummer and current Scorpions member was invited by lawnmower manufacturers Briggs & Stratton to help create a beast of a machine.

And Mikkey wasted no time in telling the designers the look he was looking for – basing the creation on the cover of Motorhead’s 1986 album Orgasmatron.

Briggs & Stratton have released two videos showing the design process and the finished article, which comes complete with leather finish, rivets, a stereo, a removable drum pad, a silver skull and a Motorhead bottle opener… perfect for popping your favourite drink while toiling away in the garden on a sunny Sunday afternoon.

Seeing the machine for the first time, Dee says: “Fuck! It’s so pimped… it’s so cool. It’s more than awesome. Who doesn’t want this?"

Unfortunately for Mikkey, he won’t have much time for gardening duties over the coming months as Scorpions are currently on tour across Europe – a run of dates which includes a headline set at this year’s Bloodstock Open Air.