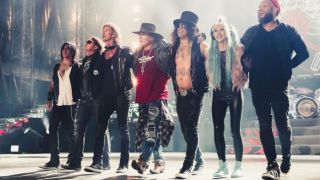 Early last month, Fortus confirmed that the revamped lineup featuring Axl Rose, Slash and Duff McKagan had recorded a “lot of stuff” which he hoped would translate into a new album – although he stressed that they hadn’t spent any time in the studio.

He now reports that everyone in the band is “excited” about a studio return and indicates that there’s new energy within the GNR camp.

Speaking about album plans, Fortus tells the St Louis Post-Dispatch: “Everyone is excited about it. There’s a really magical thing now with the band. It feels like a new band.

“It feels like the best version since I joined – and it’s the most fun for me. There’s so much excitement around it.”

Speaking earlier this year, Fortus said that Guns N’ Roses were on top of their game and had “never sounded better,” adding that they were “tighter and more focused” than they’d ever been.

Guns N’ Roses will kick off the North American leg of their Not In This Lifetime tour in St Louis later this week. Find a full list of their live shows below.

Guns N’ Roses 2017 Not In This Lifetime tour dates