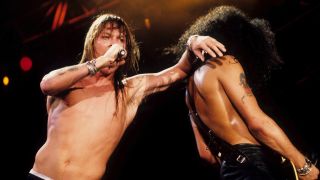 Axl Rose’s One In a Million was apparently intended to be the bird’s-eye view of a hick from the sticks – the fear, loneliness and vulnerability of a hayseed touching down in the LA badlands. A melting pot of immigrants, cultures and racial tensions, all policed by the LAPD, a corrupt, institutionally racist, arm of the US state, whose track record on race relations made the Metropolitan Police look like a collective of Guardian-reading bed-wetters (as Rodney King would later discover). At least that has been Rose’s consistent defence.

“Police and niggers, that’s right/Get out of my way/Don’t need to buy none of your gold chains today/I don’t need no bracelets/Clamped in front of my back/Just need my ticket; ‘til then/Won’t you cut me some slack?”

“Immigrants and faggots/They make no sense to me/They come to our country/And think they’ll do as they please/Like start some mini Iran/Or spread some fuckin’ disease.”

Whatever Rose’s subjective intentions – and who has ever been able to really figure out what they might have been? – for those of us who were fans in the late 80s, the sickening disappointment and sense of betrayal was palpable. We now know the 80s was rock’s greatest hypocrisy. While its public face was one of perma-tanned, mineral-watered gym-bunnies, saying ‘NO’ to drugs and practicing safe-sex, we now know the excesses were as great as they’d ever been in the cynical 70s and the idealistic 60s.

Guns N’ Roses, though, seemed a breath of fetid air. The real deal, the ultimate outsiders and the only band who’d really married the original punk ethos to the best of a rock’n’roll tradition whose lineage, ironically, could be traced all the way back to Robert Johnson and Big Bill Broonzy. To then hear Rose spitting poison at blacks, immigrants and homosexuals was a punch in the face. Maybe we were naïve but wasn’t rock’n’roll supposed to stick it to The Man? Yet here was the 80s most authentic rock’n’roll rebel planting his flag on traditional Republican soil and screaming sentiments you’d only expect from Pat Buchannan or Ted Nugent. Today, it’s virtually mainstream Tea Party mindset. It doesn’t get much more establishment than that.

Naive, too, maybe, was the belief that the rock and metal community was more tolerant, inclusive and humane. After all, empathy for the downtrodden should be second nature to people hassled by cops, bosses and mainstream society. For men and women judged, picked on and sneered at for their long-hair, tattoos and studs, accused of Satanism, records containing backward messages inducing suicide and the moral collapse of western civilisation. Yeah, we knew better. Or thought we did. Until that song. A song covered by Ian Donaldson, the goose-stepping frontman of neo-Nazi band, Skrewdriver, for Christ’s sake. We all know where such prejudice, such hatred and loathing of the outsider ends up; just ask Sophie Lancaster…

Axl’s defence was predictable. Speaking to Del James of Rolling Stone, he said, “I used words like police and niggers because you’re not allowed to use the word nigger. Why can black people go up to each other and say, ‘nigger,’ but when a white guy does it all of a sudden it’s a big put-down? I don’t like boundaries of any kind. I don’t like being told what I can and what I can’t say. I used the word nigger because it’s a word to describe somebody that is basically a pain in your life, a problem. The word nigger doesn’t necessarily mean black. Doesn’t John Lennon have a song ‘Woman Is the Nigger of the World’? There’s a rap group, N.W.A., Niggers with Attitude. I mean, they’re proud of that word. More power to them.”

When Guns and Living Colour both supported the Rolling Stones in 1989, Living Colour frontman Vernon Reid made a point of referring to One In A Million during his band’s set. Relations between the two camps were tense and the Stones entourage ensured the two bands were kept apart. Speaking in 2009, Reid said, “Axl kind of took the stand of the embattled white man. It’s a very weird thing, ‘cops and niggers, get out of my way’. How do you even equate the two, and where are you coming from? But you know, this is the kind of thing, he has this very self-dramatic, you hear it in Chinese Democracy. All the ballads are kind of crazily self-pitying…”

N.W.A’s coruscating debut, Straight Outta Compton, certainly matched One In a Million for controversy but there the comparison ended. Patently failing to grasp that the word ‘nigger’ was always far less of an issue than its context, use and intent, Axl was left mouthing the sort of resentful apologia now de rigueur among UKIP voters.

Patti Smith, another white face, didn’t garner the same reaction with Rock’N’Roll Nigger, from ten years previously. If Axl had spent just 30 seconds reading her lyrics, he might have grasped the difference: “Those who have suffered understand suffering/and thereby extend their hand/The storm that brings harm/also makes fertile/Blessed is the grass and herb/and the tree of thorn and light”.“

It was left to black US prime-time TV talk-show host, comic and actor, Arsenio Hall to spell out the obvious: “The difference is very clear. N.W.A uses it in a figurative way, whereas Guns N’ Roses uses it in a negative, derogatory way – as a white slavemaster would use it.”

The song’s queer-bashing assault was also justified by Axl. He told Kim Neely in 1992, “When I used the word faggots, I wasn’t coming down on gays. I was coming down on an element of gays. I had just heard a story about a man who was released out of the L.A. county jail with AIDS and he was hooking. I’ve had my share of dealings with aggressive gays, and I was bothered by it.”

Bizarre for a man who always counted Freddie Mercury as one of his heroes. Twisted indeed given his controversial appearance at the Freddie Mercury Tribute Concert for AIDS Awareness in 1992.

Slash, a black woman’s son, deemed the song “not cool” but reserved his anger for the song’s reception: “I don’t regret doing One in a Million, I just regret what we’ve been through because of it and the way people have perceived our personal feelings.”

Duff McKagan, as late as 2010, recalled, “My wife and I were having lunch at an outdoor cafe in Wenatchee about a month ago, when a dude in his late 20s recognised me from my Guns N’ Roses days. He stopped to talk to us, excited to tell us about what he’d been listening to and what concerts he had lined up for the summer. It all seemed nice and innocent, until he started to tell us about his girlfriend and how she had just recently gotten into rock ‘n’ roll. She used to be into hip-hop, she said. Her former boyfriends were Mexicans. But now she’s into rock, because, ‘you know, white is right!’ My wife and I both sat speechless in stunned silence.

“I used to think it was because of the GN’R song One in a Million and its use of a few choice racist words. That song was meant, to the best of my knowledge, as a third-person slant on how fucked-up America was in the 80s. I don’t know. I wouldn’t have used the words, but Axl has been known to be amazingly bold at times.

“I think for a while there in the late 80s and early 90s, GN’R were looked at as all kinds of bad things, even racists. I remember hearing that the KKK, or some faction of the Klan, had even used that song as a war cry. Art gets misunderstood all the time, but try to imagine being on MY end of this misunderstanding. Me, the little brother of a sister with a black husband whom I looked up to. What about Slash and what HE must have gone through then (Slash is half-black – or is it half-white?).”

Whatever the ins and outs, Axl Rose is certainly one in a million. The product of a fucked-up childhood he became the control freak’s control freak, taking over the band and eventually sacking everyone but himself. Maybe he thought he was writing street art for the new age? Or maybe it’s more straightforward. “Let’s face it,” says TeamRock’s Editorial Director Scott Rowley, “it’s a shit song. They could’ve lost that one easy and no one would’ve mourned. How did the record company let that go? Not by accident - you can’t tell me that no one was listening to those lyrics and it just slipped through - so you’ve got to ask: was it just a cynical stab at getting controversy?”