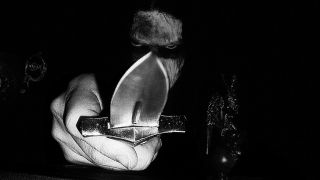 Unbeknownst to may, Greece has a black metal legacy that stretches far beyond Rotting Christ, and if Thy Darkest Shade are anything to go by, a blazing future too.

Clearly making up for lost time, seeing as their debut album, 2012’s Eternvs Mos, Nex Ritvs was released 13 years after the band were formed, the Athens-based band’s follow-up, Liber Lvcifer I: Khem Sedjet, is already upon us via WTC Productions and we have an exclusive stream of the entire, enlightened beast. Combining the technicality of 1349, the stark, occult leanings of bands such as Secrets Of The Moon, and the kind of bilious, atmosphere-steeped old-school bellow aligned with the very darkest of death metal bands, Liber Lvcifer I’s imperious charge is driven with the ruthless precision of a Hadean general and the far-sighed perspective of a seer whose nostrils are caked with sulphur. Expect Thy Darkened Shade to be ushered into the kvlt metal pantheon in 2015, so give praise to the ancient gods and yourself to the album below!