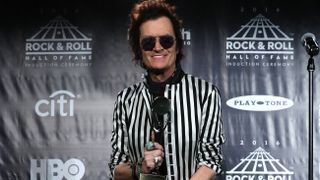 Glenn Hughes has explained why Black Country Communion never took their preferred name of Black Country despite winning a legal battle over the rights.

The former Deep Purple and Black Sabbath singer formed BCC in 2009 under the name of Black Country. But when a group from Baltimore with the same name objected, Hughes and co were caught up in a legal battle.

With the clock ticking on the release of their self-titled debut album, the band had to pick a name before the legal discussions had been settled.

“These fellows from Baltimore were verbally fighting with us and threatening us, saying ‘We’ll have thousands of our fans follow you.’

“I googled them and they’ve got seven hits on YouTube. I’m not being disrespectful, they’re young guys who wanted to make a buck, and they did make a buck. We basically threw away some money there.”

BCC split in 2012, but Hughes, Joe Bonamassa, Derek Sherinian and Jason Bonham this month announced they would return in 2017 with their fourth album.

Hughes adds: “Long may that band live because it’s a very special band for me. I will never be in another band after Black Country. It’s something that I’m very proud of.”

Hughes was inducted into the Rock And Roll Hall Of Fame this year as a former member of Deep Purple.