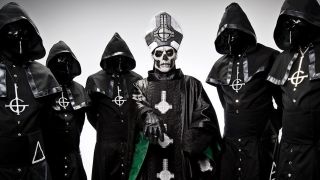 The original lead character was exchanged ahead of the launch of second album Infestissumam, launched last year – although it’s widely believed the same person remained under a new outfit.

Last night an unidentified band member told TeamRock at Sonisphere Finland: “There will definitely be a third; we’re looking into the options right now. We’re trying to work out who’s the best candidate.

“Number II is a real asshole so we’re looking for someone with a different approach to things. He still has to be an entertainer, but we’re narrowing down the contenders.”

On a more serious note, the Ghoul said some groundwork has been done on their next studio project. “We have some track title figures out, and we know the album title too, as well as thematically where we’re heading.

“Expect some more obscure covers – obviously that’s become part of our schtick. We’ve decided which ones already too.”

And he joked: “Perhaps something collaborative with Conchita Wurst might be interesting. It’s not like you’d notice her beard, being cloaked and all!”

The Finnish edition of the Sonisphere festival took place yesterday in Helsinki, featuring Metallica, Slayer, Danzig, Mastodon, Ghost and Gojira. The UK edition will be held at Knebworth Park on July 4-6, headlined by Metallica, Iron Maiden and The Prodigy.