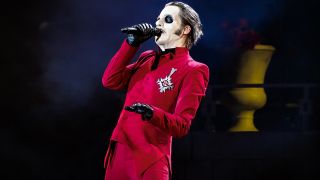 Ghost’s Tobias Forge says he’s planning on hitting the studio in the coming weeks to begin working on new material.

The vocalist was speaking to Kaaos TV when he was asked about the band’s next album – the follow-up to 2018’s Prequelle. And he says that before those sessions get under way, he’ll be concentrating on a single track which will feature on a mystery project in 2020.

Forge says: “I’ve already started writing it. I’ve been in the studio for a couple of days to record a few demos. I started that already in the summer. After new year, I'm going to go into the studio. First, I'm going to record one song that's going to be part of something that we will know of in the year from now. So that's the first thing.

“That's basically one singular song for something, and that's just to get the rocks off a little. Because that way, you can go into a new studio, you can try that new amp and that’s more like an experiment.

“As soon as I'm done with that in January, I'm just going to start full-time being in the studio writing. And that's what I’ll do up until May."

Forge adds: “On June 1, I'm going to be in aother studio with preferably the drummer I've been using for the last 10 years for most of my recordings. Hopefully then we're going to start recording the drums for all these 15 songs, something like that, I’m going to write.

Ghost are currently on the road across Europe on The Ultimate Tour Named Death which will wrap up in Toulouse, France, on December 19.