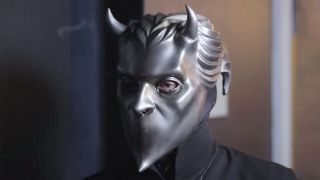 One of Ghost’s Nameless Ghouls has revealed they wrote their track He Is in response to the suicide of a close friend.

Selim Lemouchi, leader of Dutch occult psychedelic rock band The Devil’s Blood, took his own life in March 2014, at the age of 33.

The Ghoul tells Loudwire: “There’s various degrees of personal meaning in there. One of them is publicly known in our fan circles, about Selim. He chose to take his life.

“We were far apart geographically, but every time we met, we had something. We had a real blast.”

He adds that the song had existed in demo form for some time, but the lyrics “didn’t really have a bite.” It reached the stage where the band couldn’t see past the demo lyrics, even though they knew the words were “bogus.”

The Ghoul continues: “With Selim’s passing the lyrics came, and it all made sense.”

And while He Is has a level of meaning to the Ghoul alone, he says it’s ultimately about an expression of “faith to the great beyond.”

The track appears on Ghost’s third album Meliora, released in August. The band are currently touring Europe, with a run of UK shows next month.