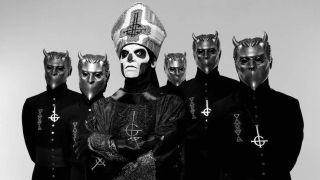 Most Ghost fans never get to see the band outside of their flamboyant stage attire – but James Hetfield usually sees them in their underwear.

The Swedish occult rockers have met the Metallica mainman on a number of occasions – usually without their costumes.

One of the band’s Nameless Ghouls, identified as “Aether”, tells MusicRadar: “James came to see us at our first San Francisco show in this tiny venue, which was more like a coffee shop. We were stood backstage in our underwear – it probably wasn’t the best way to meet your idol for the first time.

“Then he came by after the show. Of course, we were in our underwear again. Come to think of it, I’ve met James many times in my underwear. It’s crazy. The guy is like royalty to us.”

Aether also discusses how the band members have learned to communicate with each other onstage from behind their masks. He says: “You become very skilled in reading people’s body language. If a guy walks a certain way, he probably needs to retune his guitar, so I better fill in on the next part.

“After a while it feels like we’re one organism that can’t quite see or hear each other. You know your positions – there’s an element of choreography.”

Another Ghoul, identified as “Fire”, adds: “It’s a lonely place. As soon as you put the mask on, there’s that Darth Vader moment – ‘Csssshhh’ – and you’re on your own. That’s the end of communication for one-and-a-half hours. It gives no facial expression. Instead, there’s nothing, just blankness.”