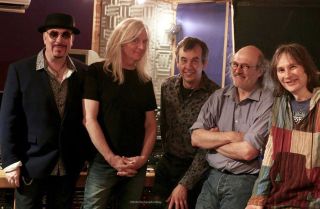 Lifesigns drummer Martin 'Frosty' Beedle has left the band. Beedle announced his departure in a short statement on the band's Facebook page.

"After nine years of close involvement and collaboration with the band Lifesigns, I feel that I can no longer give the band the level of dedication and commitment that it deserves for it to be able to move forward successfully. I have therefore decided to leave and allow someone else the opportunity to shine in this band of great musicians.

"I wish all of the band every success for the future and would like to thank all the fans for liking all the music produced so far and thank them for their continued support in the years to come. Thank you to everyone. Best Frosty. X"

John Young paid tribute to his departed band mate, saying: "From my own point of view yes it is a very sad day saying goodbye to Frosty. He was indeed the engine room of the band and is a truly wonderful talent and a lovely man. I thank him for his hard work, patience, understanding and humour through all our travels in both the JYB and Lifesigns and I wish him the very best for his endeavours in the years to come. He will be much missed... Thank You Frosty xx"

John Young founded Lifesigns in 2008. Beedle, who had previously worked with 80s rockers Cutting Crew, joined along with bass player Nick Beggs in 2010. Lifesigns released their self-titled debut album in 2013 the follow-up Cardington in 2017. A new album, Altitude, is due for release in 2021.