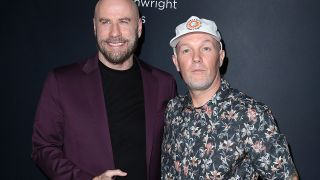 Fred Durst’s new film The Fanatic has struggled at the US box office in its opening weekend, according to The Hollywood Reporter.

The Limp Bizkit frontman directed the film which stars John Travolta, but it took just $3153 in 52 cinemas across the country over the weekend.

Travolta plays Moose, an obsessed fan of action movie star Hunter Dunbar (played by Devon Sawa) who starts to stalk the actor after being denied the opportunity to meet his idol.

The Fanatic, which Durst also co-wrote with Dave Bekerman, is reported to be inspired by a real-life fan who pursued the Limp Bizkit vocalist years ago.

Travolta praised Durst when he was a guest on Good Morning America last month, with the veteran actor saying: “Fred Durst is a fabulous director – he’s a good actor too, so he would improvise with me and get me warmed up for the scene. You would arrive in character, so it was really a great experience.”

Watch the trailer for The Fanatic below.

In November last year, Limp Bizkit guitarist Wes Borland said plans were being put in place for the band to get back in the studio to work on Stampede Of The Disco Elephants – their first album since 2011’s Gold Cobra.