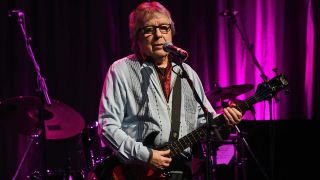 The Property From Bill Wyman And His Rolling Stones Archive sale will be held through a collaboration between the musician, Ripple Productions Limited and Julien’s Auctions, with the three day event taking place on May 29-31.

A portion of the proceeds from the auction will to towards three charities close to Wyman’s heart: The Prince’s Trust, Macmillan Cancer Support and CCMI – Central Caribbean Marine Institute.

Wyman says: “Collecting and archiving has been one of the great pleasures of my life and will undoubtedly be one of my legacies.

“It feels like the right time to share my archive with the world. I hope people will get as much joy from my collections as I have.”

Some of the auction highlights include a 1965 VOX ‘Wyman Bass’ Model Teardrop Bass Guitar, which Wyman used on the Rolling Stones tours and recordings between 1966 and1968 and a Travis Bean Custom Short Scale Bass.

There's also a 1968 Gibson Les Paul Standard Model Gold Top guitar and case, which was used by Brian Jones in The Rolling Stones Rock And Roll Circus concert and film in 1969.

Wyman is preparing to release his new book Stones From The Inside: Rare And Unseen Images on March 4 through ACC Art Books.

Along with photographs of the band, the book will also feature anecdotes and images of artists including John Lennon, Eric Clapton, David Bowie and Iggy Pop that were taken by Wyman throughout his career.

Stones From The Inside: Rare And Unseen Images
Former Rolling Stones bassist Bill Wyman will release his new book in March. The 272-page publication will include rare shots taken by Wyman of the Stones and other artists.View Deal