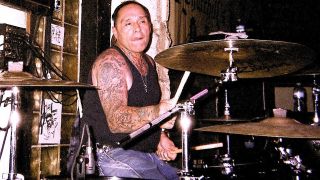 Former Misfits drummer Joey Image has died at the age of 63. The news was confirmed by Misfits on Facebook.

No cause of death has been revealed, although Image had been battling liver cancer in 2016.

Born Joey Poole in 1957, Image joined Misfits in 1978 and played on the Horror Business and Night Of The Living Dead singles. He left Misfits after their ill-fated 1979 UK tour with The Damned and went on to play with artists including The Undead.

Image briefly reunited with Misfits in 2000 for a show at Fort Lauderdale’s Culture Room, stepping in at short notice after Dr. Chud quit the band.

In an interview with the Miami New Times in 2017, Image reflected on landing the gig with Misfits.

He said: “They see me playing, and they’re like, ‘Hey, you think you maybe wanna join our band?’ So I took their tape and learned it, and two weeks later I was playing at Max’s Kansas City club in New York.

“I was in the band. That’s how quick it all happened. I was just in the right spot, basically. Plus, I did kick ass.”

Announcing Image’s death, Misfits shared a picture of the drummer onstage with the band at Irving Plaza in New York on Halloween night in 1979.