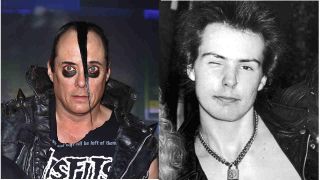 The Misfits weren’t so much formed as spawned in the sleepy town of Lodi, New Jersey in early 1977. Eighteen-year-old high school athlete Jerry Caiafa had been introduced to punk rock by casual acquaintance Glenn Anzalone, three years older. Within a few weeks, Caiafa had picked up a bass and renamed himself Jerry Only, Anzalone had adopted the stage name Glenn Danzig, after the first Polish town to be invaded by the Nazis, and the band began to get bottom-of-the-bill slots at NY punk rock Mecca CBGBs.

On February 1, 1979, Jerry was invited to a party on Bank Street in Manhattan’s Greenwich Village, where he was introduced to infamous Sex Pistols bassist Sid Vicious. The Pistols had split up a year earlier after a notorious gig at San Francisco’s Winterland Ballroom, and Vicious was in town to try and launch himself as a solo artist.

When Jerry met him at the party, Sid had been released earlier that day from Riker’s Island on bail for the alleged murder of his girlfriend Nancy Spungen, who had been found stabbed to death at the Chelsea Hotel in October 1978.

“I was one of the first people at the party, so I ended up making bolognaise sauce with his mom, Anne Beverly,” says Jerry. “Then a bunch of his buddies rolled in and all they did was get high.”

Drugs weren’t Jerry’s thing. “When you went into New York, everybody was shootin’ dope,” he says. “It was a heavy narcotic scene. I wasn’t about that. That’s why we came up with the horror thing. We loved horror films, sci-fi, B-movies. We weren’t drug-shootin’ beatnik Bowery Boys.”

As Jerry watched, Sid began to nod out from the effects of the heroin.  “I had to smack Sid round a coupla times. I said, ‘This is ridiculous’ and his mom said, ‘Well, it happens all the time.’ I said, ‘It shouldn’t happen at all!’ I got outta there and left them to it.”

The next day, Jerry was driving from New Jersey to Connecticut to pick up some parts for his dad’s machine shop when he heard that Sid had died at the party.

“I couldn’t believe it,” he says. “I was the only person in New York who had a car – my mom’s old brown station wagon – and I was like the undertaker for the kid. I drove his mom to the coroner, took her to the cemetery where Nancy was, helped her put Sid’s ashes on her grave.”

Rumours began to circulate that Vicious had committed suicide. But it soon became apparent that Sid tolerance for heroin had gone down while he had been in prison. The fact that this was an especially strong batch of smack made for a fatal combination.

“At first people thought he’d killed himself, but the drugs were just too pure – the coroner had never seen anything like it,” says Jerry now. “It was such a waste – he had all the potential in the world. Sid was outgrowing the Sex Pistols… he had just done My Way – he coulda been the new Frank Sinatra if he’d just stayed alive.”