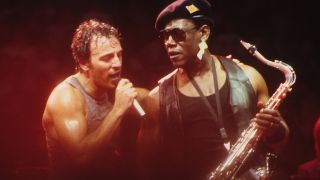 A film focusing on the life of Bruce Springsteen’s saxophonist Clarence Clemons is to be released this summer.

A crowdfunding campaign was set up to help steer Clarence Clemons: Who Do I Think I Am? to completion, with Deadline reporting that it'll hit select cinemas in July, with a DVD home release planned for August 17 through Virgil Films & Entertainment,

The Nick Mead film will feature interviews with Bill Clinton, Nils Lofgren, Joe Walsh and his nephew Jake Clemons, who joined The E Street Band after the saxophonist’s death in 2011.

A statement reads: “The world knew him as The Big Man. The Minister Of Soul. The Secretary Of The Brotherhood. Musician, singer, songwriter and a lifetime member of the E Street Band.

“But there was also a deeply spiritual side to Clemons that took the saxophonist to China in 2005. Filmmaker and friend Nick Mead documented what became a spiritual quest and search for meaning that began on the Great Wall and continued until his death in 2011.”

The film was shown at the Asbury Park Music And Film Festival earlier this year, while an on-demand TV release is expected in early 2020.