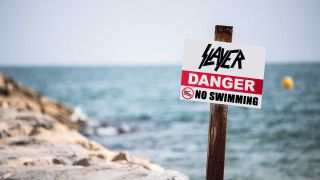 But the metalhead, who was sporting an Anthrax t-shirt, refused to go quietly and decided to try and swim back into the open air venue, which is located on the city’s East Island.

Unfortunately, LaRocque was unsuccessful in his daring attempt – but he’s now been honoured by Budweiser, who have put his face on a special edition can of beer, which has been created to celebrate the 25th anniversary of the venue.

Sharing pictures of the can on Facebook, LaRocque said: “So, I guess I made it on a beer can label. I wonder if I can get free beer?”

Anthrax were one of Slayer's special guests on the night, with guitarist Scott Ian later highlighting LaRocque’s plight by sharing pictures of the music fan on Instagram with the caption: "Fan of the tour. He got kicked out and tried to swim back in. Swipe left! #commitment #allin #hypothermia."

Fan of the tour. He got kicked out and tried to swim back in. Swipe left! #commitment #allin #hypothermia Scott Ian