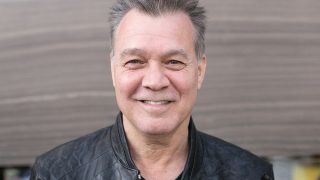 Eddie Van Halen and his son Wolfgang attended Tool’s show at the Staples Center in Los Angeles on Monday night.

And while the guitarist and bassist were there to see Maynard James Keenan and co play tracks from their new album Fear Inoculum, Eddie got a surprise when a fan approached the guitar wizard for a photograph.

The man wanted Eddie to take his picture, but had no idea he was asking one of rock’s most famous guitarists.

Wolfgang captured the moment on camera and uploaded it to Twitter explaining: "A guy asked my dad if he could take a picture of him with the stage behind him, having no idea who he just asked. That was my favourite moment from the Tool show last night.”

There’s been much speculation surrounding Eddie’s health recently, with some online reports suggesting he’s undergoing treatment for throat cancer, although there’s been no official news from the guitarist’s camp.

Earlier this month, Van Halen frontman David Lee Roth caused a stir when he said he thought the band was “finished” with the vocalist adding: “Van Halen isn’t going to be coming back in the fashion that you know. That being said, Eddie Van Halen’s got his own story to tell – it’s not mine to tell.”

A guy asked my dad if he could take a picture of him with the stage behind him, having no idea who he just asked, and that was my favorite moment from the @Tool show last night. pic.twitter.com/tA1lywM0yfOctober 22, 2019