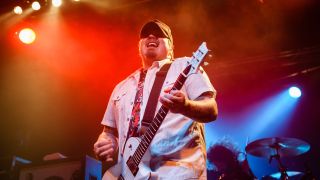 It’s out next week, but we’ve put our gnarled old hands on an exclusive stream of the entire album, which you can hear below.

Readers of the print edition of Classic Rock will have noticed Black Stone Cherry straddling the front cover, while inside, they talk about the album. “This is the first record we’ve made where we weren’t guided or pushed a certain way by our label” says drummer John Fred Young. “We were left alone, and it was marvellous.”

Guitarist Ben Wells adds, “We went in feeling a real sense of freedom and confidence about what we wanted to be as a band and what we wanted this album to sound like. We wanted it to be something that would really go over with our fans live. That’s where we really sell ourselves. We wanted to showcase the heavy riffs and the melodies.“[](https://api.soundcloud.com/playlists/32484504?secret_token=s-9Gd3z)

Black Mountain is available to pre-order from iTunes and Amazon now.

Want more? The new edition of Classic Rock also features a FREE CD of hits, exclusive acoustic songs and brilliant live tracks (from Download 2013) from the band. It’s available from newsagents who like it loud, and online, now.

Black Stone Cherry tour this side of the Atlantic in October.