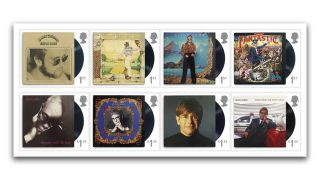 The Royal Mail have released a set of stamps to celebrate Elton John’s career.

Two sets have been printed, with the first featuring eight of his album covers, with a further four presented on a miniature sheet capturing Elton's live performances through the years.

Elton says: “To say I was surprised when Royal Mail got in touch is an understatement. Never did I think I'd appear on a stamp. It's wonderful, a great honour.”

Royal Mail spokesperson Philip Parker adds: “Elton is one of the most successful British solo artists of all time. He has recorded some of the best-known songs in pop history such as Candle In The Wind and Rocket Man.

“Our stamps issued today showcase some of his most iconic albums, and celebrate his fantastic musical contribution.”

The collection of stamps are available to purchase direct from Royal Mail, while Elton’s Farewell Yellow Brick Road tour continues in Salt Lake City on September 4.

In 2017, Royal Mail announced the launch of a set of David Bowie stamps by fixing them to helium balloons which were then released in the stratosphere in honour of Bowie’s 1976 film The Man Who Fell To Earth.