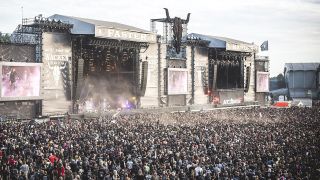 UPDATE: According to the Associated Press, police spokesperson Peter Berndt has given an update on the story to clarify that the pair were actually in their late 50s and had left a home for people with mental health issues on Friday night to enjoy a night in Wacken, close to the festival site.

Music fans are said to have contacted police after finding them both at a bus stop in the early hours of Saturday morning.

A previous statement by local police had reported that the pair had “obviously liked the metal festival.”

Two elderly men escaped from their German nursing home over the weekend so they could attend Wacken Open Air.

The festival featured artists including Judas Priest, Nightwish, Ghost, Behemoth, Gojira, Dimmu Borgir, Arch Enemy and more – with the Deutsche Welle website reporting that the pair sneaked out on Friday so they could take in some live music.

Staff discovered the two were missing from the home later that day and alerted police, who found them at 3am on Saturday morning at the festival site. Police reported they were “disorientated and dazed.”

Tickets for next year’s Wacken Open Air are now on sale, with a handful of bands including Parkway Drive, Sabaton, Airbourne, Avatar and Meshuggah already confirmed.