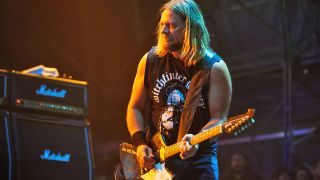 Pepper Keenan is aiming to reactivate his role in Corrosion Of Conformity by bringing the Deliverance lineup of the band to Europe.

And he says Down aren’t planning to record the next in their series of EPs until next spring.

Keenan last worked with COC in 2010. He never officially left the band, although the current lineup of Reed Mullin, Woody Weatherman and Mike Dean released their IX, their second album without him, in June.

Speaking ahead of Down’s headline appearance at Bloodstock last night, Keenan told TeamRock: “The old COC thing’s been coming up a lot. We’re talking to Reed and Woody about getting that going.

“That’s going to take a lot of attention. We’re talking about just going to Europe and playing shows as the Deliverance four-piece, and starting from there to get it back together.”

The Down Part II EP was released in May, following the first six-tracker in 2012. And Keenan reports the supergroup are in no rush to get to work on the third, saying: “We’re just getting our feet wet on this thing. We’ve got a ways to go on this EP; it’s got strong legs on it. We’re going to keep pounding it out.”

Work won’t begin until 2015, he predicts: “We’re going to start writing in February, start putting the pieces in place.”

Keep up to date with Metal Hammer’s live Bloodstock coverage at MetalHammer.com, on Facebook and via Twitter. Stay tuned for details of aMetal Hammer Show Bloodstock special from TeamRock Radio. A live video stream is available all weekend via Dailymotion.