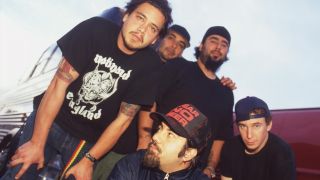 The brand new issue of Metal Hammer magazine is on sale today and features Deftones on the front cover.

Inside the magazine, the band reflect on the making of their landmark White Pony album, which celebrated its 20th anniversary earlier this week.

When their third studio album launched in 2000, it divided opinion among the band’s fans, with some claiming Deftones had turned their back on their heavy sound.

Looking back on White Pony's release as part of an exclusive 10-page feature on the record, Deftones frontman Chino Moreno tells Metal Hammer: “That record wasn’t loved right away. As much as Deftones fans love it now, they didn’t because we were known more as a nu metal band.

“They were trying to box us into that. White Pony separated ourselves from that genre that was at its peak, so I still felt we were in an uphill battle to earn our place.”

He adds: “We didn’t know if people would like White Pony, we just did it anyway. And for that reason, I’m really proud of it. But I also think that’s why it’s still successful, because we followed our instincts.”

Issue 337 of Metal Hammer features further insight into the making of White Pony and also includes an interview with the album’s producer Terry Date, a run-down of what the title means and more.

Last week, it was confirmed that White Pony will be reissued later this later alongside a DJ Shadow remix of the album titled Black Stallion.

Announcing the news, Moreno said: “We had that idea pretty much 20 years ago. I think even before we started recording White Pony, we had the idea to remix it, so this is something we always kind of joked about and now it’s actually coming to life.”