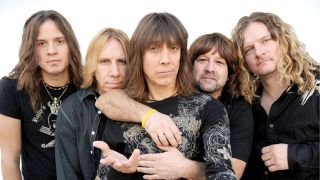 Tesla have revealed they’ve collaborated with Def Leppard guitarist Phil Collen on a track which is to be released as a single next year.

Both bands have been on tour together across North America this summer, and the Leppard man and the Californian outfit have decided to get together to record a song tentatively titled Save That Goodness.

Tesla say: “A man with tremendous energy and love for Tesla, Phil Collen has been hanging out and working with Tesla on new music. A great friend and mentor to the band.”

The band reveal the track written by the Def Leppard man has an “upbeat, catchy melody” and add: “Starting in 2016, Tesla has a few recorded surprises coming. This new song and the other recorded material is scheduled to be released in February.”