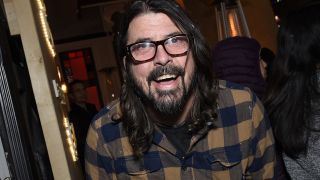 Dave Grohl says he’s been thinking about writing his memoir for years – but just hasn’t found the right time to make it happen.

The Foo Fighters leader launched his short stories series on Instagram in March this year – and asked by Entertainment Weekly if an autobiography is something that will ever happen, Grohl replies: “Oh absolutely.”

He continues: “Years ago I was at a barbecue and I met a book agent, and he said, ‘Have you ever considered writing a book?’ I said, ‘Well, of course, someday,’ and he said, ‘It’s really easy. You’ll do four or five hours of interviews and someone else will write it in your voice and it will be great.’ And I thought, ‘Fuck that!’

“I come from a family of writers, and granted I’m a black sheep, but I’m not that bad. So I figured if I were to ever write a book, it would be in my hand.

“I’ve considered it for years but I never had the time, and I never felt like I was ready because every day something happens that I’d love to write about – and I’d hate to write sort of a typical autobiography.

“Years ago I thought, ‘Maybe it’ll just a collection of anecdotes. Maybe instead of it just being my life in 300 pages it could be just funny stories.”

Grohl adds: “Most rock musicians are great storytellers because most rock musicians have spent more than a few hours in the back lounge of a bus spinning yarns, swapping stories about all the different people they’ve gotten wasted with or jammed with. So there aren’t too many rock musicians that are short on great stories.”

Grohl previously reported that the new Foo Fighters album is finished and he recently gave an insight into how it was sounding.

He told Los Angeles radio station ALT 98.7 FM: “It's filled with these anthemic, huge, sing-along rock songs. It's almost like a dance record in a weird way. Not an EDM, disco, modern dance record – it's got groove.

“To me, it's like our David Bowie's Let's Dance record. That's what we wanted to make, because we were, like, 'Let's make this really up, fun record.’ It’s got its dark corners, but we were so excited to go out an play and then we just hit pause on everything.”

The Foos have rescheduled their Van Tour, with the shows now taking place across North America in October and December.