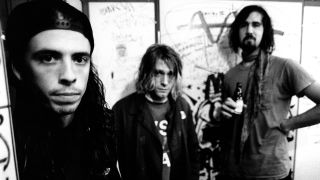 Dave Grohl has reflected on his time in Nirvana and revealed he did everything he could to make himself indispensable as he thought he might be fired.

The Foo Fighters leader makes the comments on Matt Wilkinson’s upcoming show on Apple Music, which will be broadcast tomorrow (July 4) at 3pm BST.

Grohl says: “When I joined Nirvana, I was their fifth drummer. They'd had a team of drummers before me and some of them were more in the band than others. So when I joined, I didn't know Krist Novoselic and Kurt Cobain at all.

“When we first met and started playing, it was clear that it worked really well, and we sounded what most people know now to sound like Nirvana. But you just meet these people and then it wasn't long... it was almost exactly a year from the time I joined to the time Nevermind came out. Once it came out, it was like things happen so quickly.

“The band got really big. But every band I'd been in before was with friends that I'd known for a really long time, so there's some security in that."

“You're just so nervous that you're going to either get fired or it's going to stop. I didn't want to get fired basically. And so I was doing my best to keep this thing from going away. So there was this real insecurity that I had, ‘I’m not good enough. They're going to find somebody else.’"

In the interview, Grohl also looks back to Foo Fighters’ self-titled debut album which celebrates its 25th anniversary tomorrow – and says if he could go back, he’d dedicate the record to Cobain and Novoselic in the liner notes.

Grohl explains: “I mean, it should be a lot of people but I would dedicate it to Krist and Kurt. I can't say it's the most important event in my entire life, but it's safe to say that we wouldn't be here right now talking about this if it weren't for my time in Nirvana.

Grohl and Foo Fighters have wrapped up work on the follow-up to 2017’s Concrete And Gold, with Grohl checking in back in March to say that it’s “unlike anything we’ve ever done.”

They’re due to head out on their rescheduled Van Tour later this year.